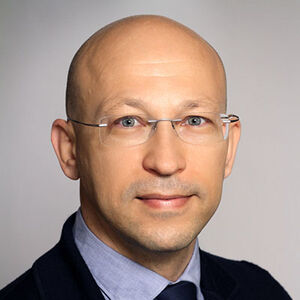 Olexiy Kyrychenko joined the chair of International Economics at the Nijmegen School of Management as an Assistant Professor in August 2022. He is a Ph.D. Candidate in Economics at CERGE-EI (the Czech Republic, under U.S. permanent charter), close to obtaining his Ph.D. degree. He received his M.A. in Economics and Econometrics from CERGE-EI in 2015. Olexiy was awarded a Marie Skłodowska-Curie fellowship and held visiting positions at Princeton University (Health and Wellbeing, 2018) and UC Berkeley (Environmental Economics, 2019-2020). Since August 2020, he is also a Visiting Fellow at the International Sustainable Finance Center (the Czech Republic). Before CERGE-EI, Olexiy held various teaching, research, and administrative positions at Zaporizhzhia National Technical University (Ukraine), including an Associate Professor position at the chair of International Economic Relations. During this period of his career, he published more than 20 articles in mainly Ukrainian economic journals and was awarded an academic rank of a Docent (Associate Professor). He obtained his CSc. (Ph.D.) in World Economy and International Economic Relations from Dnipropetrovsk University of Economics and Law (Ukraine). He was also a recipient of the Fulbright Scholar Award for conducting his research (International Finance) at UC Berkeley in the 2011-2012 academic year.

Olexiy is an applied microeconomist with research interests at the intersection of environmental and health economics, climate change, and development economics. In his Ph.D. thesis, he combines large administrative datasets with satellite-derived estimates and spatial information (i) to quantify the effects of air pollution on infant mortality, (ii) to reexamine the effectiveness of environmental regulations, and (iii) to study the impact of air temperature on output and climate change adaptation strategies of manufacturing firms. He is currently involved in several other projects, including the one of the World Bank, where Olexiy is a part of the research team composed of Daniel Chen (World Bank, Toulouse School of Economics), Shareen Joshi (Georgetown University), Patrick Behrer (World Bank), and Shashank Singh (IIT, Kharagpur).